Of course the large acceleration can also be avoided by simply going into free fall.

Consider an observer starting from rest far away from the black hole and moving inwards in free fall. While we pause at the last station 4 kilometres above the horizon, he passes by us at 99.75 percent of the speed of light. When he takes pictures of the whole panorama at this instant, the result is Fig. 7: The black hole in front, the starry sky to the side and the back.

Fig. 7: Panoramic view of a freely falling observer that momentarily at 0.9975 c is 4 kilometres away from the horizon.

This picture is taken at the same place as Fig. 6ba, so why does it look completely different?

The reason is a phenomenon called aberration. In everyday life we can observe aberration for example when snow is falling: On a windless day the snow flakes fall vertically downwards. But seen from a moving car, they come obliquely from the front, the faster the car, the closer their path is to the horizontal. The same holds for rain; this way, it is possible to drive through the rain in an open cabriolet and to remain dry simply by driving fast enough. For then the raindrops move sufficiently close to the horizontal direction and the windscreen holds them off. 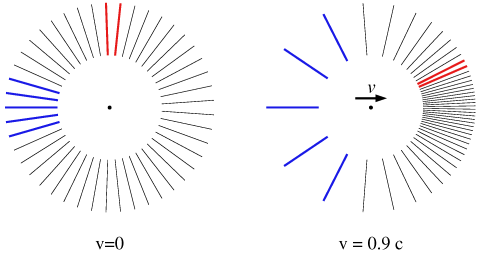 It is a general fact that the direction of a motion of any kind is assessed depending on the observer's own state of motion. This is also true for light: Two observers in relative motion ascribe different directions to the same light ray (Fig. 8). Light that reaches one of them (the "observer at rest") from above (Fig. 8a, red rays), approaches the other ("in motion") obliquely from the front (Fig. 8b, red rays). When in the stationary space ship we see the starry sky in a small "spyhole" behind us (Fig. 8a, blue rays), then for the infalling observer the starry sky must appear larger (blue rays in Fig. 8b). Actually in Fig. 7 it covers most of the celestial sphere.

One can figure out that the freely falling observer still sees the black hole with an angular diameter of less than 90 degrees in the instant he crosses the horizon. This means that in free fall we still see the black hole in front of uns when as a matter of fact we are already inside. When approaching step by step, in contrast, it appears to us that we are already inside when in reality we are still some distance outside the horizon.