Step by step towards the horizon

We approach the horizon up to a height of 90 kilometres (Fig. 4a) and keep this distance constant by accelerating with 30 billion g (30 thousand million g). The central black disc fills the whole field of view to the front (left picture). Towards the side (middle picture) and the back (right picture) we see the sky with the Milky Way. Each section covers a horizontal viewing angle of 90 degrees so that the three pictures combine to a 270 degree panoramic view.

45 kilometres above the horizon (Fig. 4b) the black hole takes up exactly half the celestial sphere; from a distance of 30 kilometres (Fig. 4c) is even covers more than half of the sky. It appears to partially enclose the observer – at the same time we are still outside the horizon!

Fig. 4: View to the front (left), to the side (middle) and to the back (right) in a height of 90 kilometres above the horizon (a). b/c: in a height of 45 kilometres / 30 kilometres. These pictures, too, are taken while the virtual space ship keeps its distance to the black hole constant. 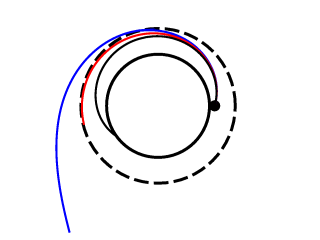 When we see these pictures we are located close to the circular light orbit. An observer exactly on the circular orbit (Fig. 5a) and looking to the side sees the back of her own head (red ray). Light from the stars reaches her from farther outwards (blue ray), so that the starry sky covers exactly one half of a complete panorama. Light from farther inwards would have to come from the black hole (black ray) and since no light escapes from the horizon, the other half of the panorama is black.

An observer inside the circular orbit (Fig. 5b) must look still farther to the back in order to receive light from the outside world (blue ray), so that the starry sky covers less than half of the total panorama. 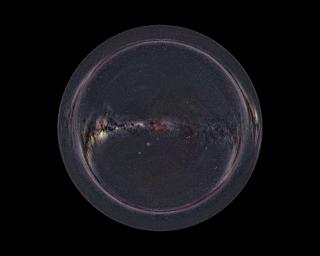 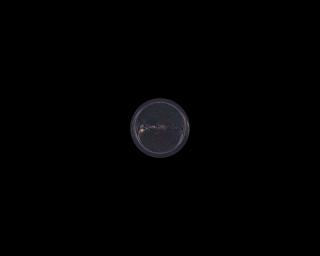 (b)
Fig. 6: View to the back in a height of 13 kilometres (a) and 4 kilometres (b), while the virtual space ship keeps its distance to the black hole constant.

From a height of 13 kilometres (Fig. 6a) the view to the side is filled by the central black disc. One must look backwards in order to see the outside world – that is still seen, at least in principle, an infinite number of times. This "spyhole" on the rest of the world becomes arbitrarily small when we come close enough to the horizon. The last station of the virtual journey: 4 kilometres above the horizon (Fig. 6b), keeping the distance constant with two billion g (two million million g).

By the way, the same optical effects can be observed with smaller accelerations when the destination is a black hole of larger mass. In order to see the last picture, Fig. 6b at only 1 g, we should need a hypothetical black hole of 20 trillion solar masses. This is far beyond the masses of the supermassive black holes in the centres of galaxies with their millions to billions solar masses.