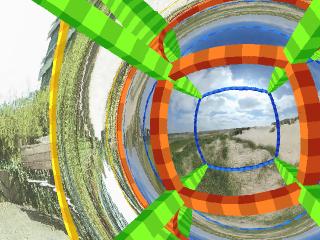 Flight through a Wormhole

Corvin Zahn, March 13, 2008
Wormholes are traversable connections between two universes or between two distant regions of the same universe. This contribution shows a flight through the wormhole that connects Tübingen University with Boulogne sur Mer in the north of France.

What is a wormhole?

The wormhole of the University of Tübingen.

Wormholes are traversable connections between two universes or between two distant regions of the same universe. They are a popular feature of science fiction stories where they allow travelling to extraterrestrial cultures.

The wormholes described here are exact solutions of Einstein's field equations; they were developed by K. Thorne to give a scientific foundation to the novel Contact by C. Sagan ([1]) (The story of this development is told in [2]; [3] gives the theoretical background).

Even though these wormholes are in agreement with the theory of relativity, their implementation in practice meets a little problem: In order to curve spacetime in such a way that a wormhole forms, an exotic type of matter is required with negative energy density. In the case of the wormhole described here, the absolute values of this energy density would have to be extremely high, up to a billion times the density of a neutron star. Such a type of matter is not known in our universe. Also, to make it possible to fly and to look through the wormhole, this exotic matter must not interact with normal matter or with electromagnetic radiation.

But these technical problems cannot prevent us from simulating, on the computer, a flight through such a wormhole.

The wormhole shown here connects the place in front of the physics institutes of Tübingen University with the beautiful sand dunes near Boulogne sur Mer in the north of France (image source [4]). For the theoretical astrophysics personnel it is handy for short trips in their lunch hour.

In order to clearly show the properties of the curved space (that itself is invisible), a cubic lattice of 12 yellow rods has been built around the wormhole. The rods follow geodesics, i.e. lines that are as straight as possible. The visible distortions, especially of the rods behind the wormhole, come from light deflection in the curved space.

Eight green rods point radially inwards from the corners of the yellow cube. They approach each other and in flat space they would meet in the middle. In the curved space of the wormhole they do not.

At the throat, the interface between the two universes connected by the wormhole, the diagonal rods meet the corners of a red cube the edges of which are also geodesics. The diagonal rods continue straight-lined into the other universe. There, they move apart and meet the edges of the third, blue cube from the inside. The blue cube has the same size as the yellow one.

The following movies show a flight from Tübingen to Boulogne sur Mer and back.

A few scenes of the movie

The wormhole in front of the physics building of Tübingen University.

Approaching the throat we see the landscape on the other side of the wormhole. The green diagonal rods continue straight on.

Almost at the throat

We see that the green diagonal rods meet the corners of the blue cube from the inside.

On the other side

Looking back through the wormhole, we perceive the buildings of Tübingen University on the other side.

The wormhole is seen to hover above a sand dune near Boulogne sur Mer.

Round trip at the throat

Before traversing the throat we turn upwards and move over the red cube that marks the plane of the throat.

Above the plane of the throat

The red cube appears to be an infinite plane. Its edges are flat and the quadratic side faces have corners of 120 degrees. "Cubes" of this kind, contradictory to everyday geometry, are possible only in a curved space.

Through the side faces of the red cube, we can look into the other universe. Here we look down on the floor below the wormhole in Tübingen.

Looking to the side

When looking through the next red square, we see the Tübingen scene from the side.

On to the next red square: Through it we are looking up to the sky above the wormhole.

Looking to the other side

The view through the next square shows a number of benches, upside down.

We have completed the tour around the wormhole and look once again through the first red square, downwards.

We leave the wormhole and come back to Tübingen.

There, once again we look back towards the wormhole.

Morris and Thorne ([3]) describe a wormhole as a solution of Einstein's field equation with the following metric:

l takes the values −∞ ... +∞. The two different signs of l represent the two universes that for large |l| are flat Minkowski spacetimes. The surface l = 0 (spherical topology) links the two universes. Its surface is determined by the radius of the throat b0 = 0 .

In an orthonormal frame , the only non-vanishing components of the Riemann tensor are

and the components that follow from these by symmetry. Substituting the metric into the field equations we obtain the energy momentum tensor:

It has the unpleasant property of a negative energy density which according to the state-of-the-art of scientific knowledge excludes the technical realization as well as the natural occurence of such a wormhole.

Figure: Embedding diagram of the equatorial plane of a wormhole with throat radius b0 = 2, the coordinate l is plotted in the range −50 ... +50 .

Due to the spherical symmetry one can use a two-dimensional plane through the origin to describe the main properties of the metric and the photon paths. This plane can be embedded in a three-dimensional Euclidean space. The spacelike metric in the equatorial plane reads

the embedding surface (top) consists of the points with the cartesian coordinates x, y, and z:

, Panoramic photo of sand dunes near Boulogne sur Mer in the north of France.

More: A trip to a black hole is described in Destination Black Hole, an overview of this simulation is given in step by step into a black hole.