Other places of interest

Fig. 11   Passing by a fictitious sculpture in the shape of a sphere with a grid of parallels and meridians. We move at 0.9 c and look in the direction of the motion.

The previous examples have shown that objects appear strongly distorted when we pass close by at nearly the speed of light. This rule, however, has a remarkable exception. To illustrate this, we have placed a fictitious sculpture in the shape of a sphere in the alley Kirchgasse (figure 11). The sphere, like a terrestrial globe, carries a grid of parallels and meridians. We drive past it at 90% of the speed of light and take a snapshot at the point of closest approach to the sphere. As expected, the sphere appears to be in front of us and the grid looks distorted. However, the outline of the sphere is still a circle. It can be shown that a sphere always appears to have a circular outline, regardless of the observer's speed and distance [9]. 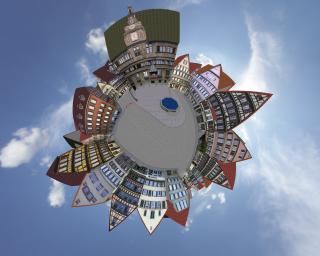 Fig. 12   The market place of Tübingen, seen during a nosedive at 0.9 c. The instantaneous height above ground is 10 m. We move vertically downwards and look in the direction of motion.

We conclude the tour of the city with a flight that gives a bird's eye view of the market place. Figure 12 shows its looks during a nosedive at 90% of the speed of light; this snapshot is taken 10 m above ground.