A rigid body that, when measured at rest, has the shape of a sphere, therefore in motion has - when observed from the frame at rest - the shape of an ellipsoid of rotation with the axes

While the Y- und Z-dimensions of the sphere (and therefore of every rigid body of arbitrary shape) do not appear modified by the motion, the X-dimension appears shortened by the factor 1 : √(1 - v2/V2) , i.e. the more the greater v. For v = V all moving objects – observed from the frame “at rest” – shrink to two-dimensional entities. 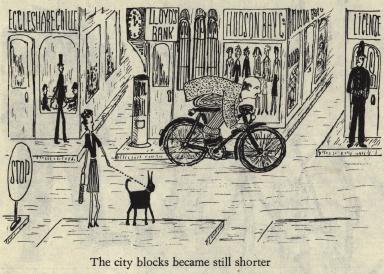 Fig. 1   Illustration by G. Gamov [2]: The biker (and with him the observer) moves down the road at nearly the speed of light and sees the houses contracted.

So should we image a fast moving object to look contracted in the direction of motion? Taken literally, Einstein's statement means just that. And this notion was in fact illustrated by the physicist George Gamov in his 1940 book “Mr. Tompkins in Wonderland” [2,3]. There he writes about a virtual world in which the speed of light is only 30 km/h, so that even a biker can move at nearly the speed of light. This biker sees the houses at the roadside allegedly as shown in figure 1, contracted in the direction of motion.

However, this picture is entirely wrong. It is wong because Gamov did not take the consequences of the finite speed of light into account. In everyday life we may to all intents and purposes pretend that the speed of light is infinite, since we are always concerned with much smaller velocities. But when a velocity close to the speed of light is involved, this is not justified any more. On the contrary, what we should see in this case would be substantially influenced by the fact that light propagates at a finite speed. 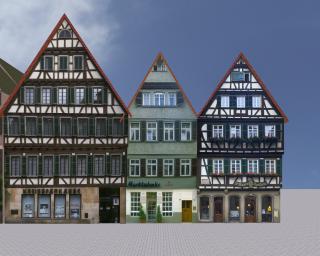 Fig. 2   Houses on the market place of Tübingen. This is the view of a cyclist who passes by slowly (much slower than c) from the left to the right and looks to the side over her left shoulder.

The view that a cyclist going at nearly the speed of light would “really” have of houses on the roadside is shown in figures 2 to 4 (in the figure captions we employ the usual symbol c for the reduced speed of light, too). Figure 2 shows the houses as seen by an observer at rest or in slow motion.

Fig. 3   View of the contracted houses according to Gamov. The relative velocity is 0.9 c.

When moving by at nearly the speed of light, a measurement of the shape of the houses would reveal them to be contracted in length as described by Einstein. A view of the contracted houses according to Gamov is shown in figure 3. 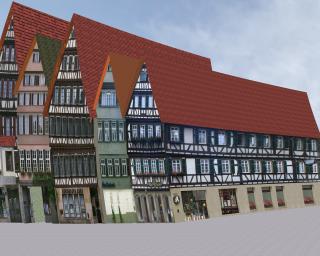 Fig. 4   This is how a cyclist would see the houses on the market place of Tübingen when passing by at 0.9 c from left to right and looking sideways over her left shoulder.

But when the fast cyclist looks at the houses, then she sees them rotated and distorted (figure 4).

Surprisingly, it has taken a long time to realize that an observer at nearly the speed of light must see her surroundings distorted. After all, it was in 1676 that the observations of Olaf Römer established that light propagates with a finite speed. But it was not until 1924 that Anton Lampa [4] described the visual effects for the first time. Later, the work of Roger Penrose [5] and James Terrell [6] was the starting point for a large number of investigations (see [7] for an overview over the literature).