Changes in colour and brightness

The computer simulations shown above display the objects in colour. This colouring, though, is only used for clarity and is not realistic. The Doppler and searchlight effects (a Doppler shift towards shorter wavelength always comes along with an increase in intensity and vice versa) let the colour and brightness of an object appear quite different when in high speed motion than when at rest. 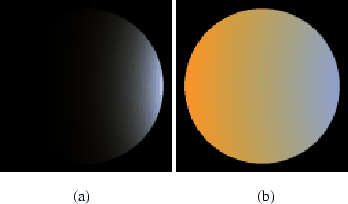 View of the sun during a close fly by at 99% of the speed of light (a). If the image is processed in such a way that each image point has the same brightness, the Sun appears to be multi-colored (b).
Movie: Sun fly by, MPEG4 (99 kB)

On a relativistic Sun fly by, for instance, the Sun appears bluish and very bright when approached. During the fly by, when the Sun moves to the side and the back of the observer, the colour changes from blue via white and orange to red, and the brightness decreases. Finally, when looking back the Sun appears dark red and faint.

There are situations for which the change in brightness nearly completely determines the looks of an object. Figure  10a shows a picture taken on a close Sun fly by at 99% of the speed of light. The Doppler effect that depends on the viewing direction, here is noticeably different at the left and the right hand side. The brightness differs accordingly: it increases so much from the left to the right that compared to the bright right hand border the rest of the solar disc appears dark. Not until the picture is processed so that every point has the same brightness (Figure  10b) can the change in colour be perceived.