What does an object look like when moving at nearly the speed of light?

One of the basic effects of the special theory of relativity is length contraction. In the master's own words (where V denotes the speed of light):

Thus, whereas the Y and Z dimensions of the sphere (and therefore also of every rigid body, whatever its shape) do not appear modified by the motion, the X-dimension appears to be contracted in the ratio \( 1:\sqrt{1 - (v/V)^2} \) , i.e., the greater the value of \( v \), the greater the contraction. At \( v=V \), all moving objects - viewed from the "stationary" system - shrink into plane figures.

From „On the Electrodynamics of Moving Bodes“, Albert Einstein's seminal article of 1905 on the special theory of relativity [ 1]). 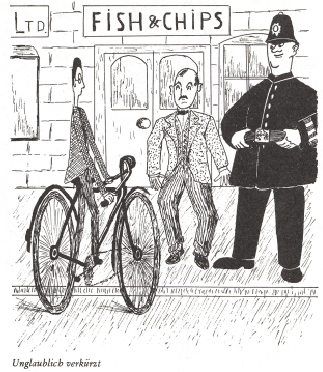 Figure 1: Illustration in a book [ 2] by George Gamow: Alleged view of a cyclist moving at nearly the speed of light.

Does this mean that an object flying by at high speed looks compressed? Taken literally, Einstein's statement means just that. And this opinion was also expressed by George Gamow in 1940 in his book "Mr Tompkins in Wonderland": In this book Gamow describes a virtual world in which the speed of light is as low as 30 km/h so that a cyclist can move at nearly the speed of light. Mr Tompkins watches this cyclist at 93% of the speed of light and sees him as depicted in Figure  1, contracted in the direction of motion to 37% of its rest length.

Figure 2: A sphere (a) moving at 95% of the speed of light is contracted to an ellipsoid (b) as a measurement of its shape would show. Looking at the moving sphere, one sees it with an exactly circular outline, but rotated (c). Calculated „nonrelativistically“ (i. e. without taking length contraction into account) the moving sphere looks more like a zeppelin (d).

This picture, however, is not correct. And why? Because the light travel times resulting from the finite speed of light have not been taken into account.

In everyday life, where all relative velocities are small compared to the speed of light, we can always assume that when light rays reach our eye simultaneously and there create the image of some object, they have also simultaneously left the object. This assumption is, of course, not justified any more, when the relative velocity between observer and object is comparable to the speed of light. Then, the light travel times have to be taken into account.

What a sphere and a cyclist would really look like at high speed is shown in Figures  2 and  3: A sphere (Figure  2a, at rest), when measured in accordance with Einstein's definition of simultaneity, is contracted into an ellipsoid (Figure  2b). But when looked at (Figure  2c) it appears perfectly circular, though rotated!

Given that already since Olaf Römer's observations of 1676 it has been known that light propagates at a finite speed, it would have been possible more than 300 years ago to conclude that objects moving at nearly the speed of light must look distorted. Surprisingly, no such conclusions have been drawn in the framework of classical physics. Figure  2d shows the classically (i. e. without length contraction) computed appearance of a fast moving sphere. It appears rotated and in addition stretched. The comparison of Figures  2c and Figure  2d reveals the effect of length contraction. It ensures (as can be proved generally) that a sphere with any speed and at any distance is always seen with a spherical outline. In light of this result one might nearly become philosophical. Fast moving objects can only be watched comfortably if the fly-by time is long enough. Their dimension must then be on the order of light seconds, i. e. they must be as large as stars. But stars because of gravitation are always spheres. The Lorentz transformation and with it our space-time structure are set up in such a way that stars always retain their shape whatever the speed of a racy spaceflight.

Figure  3 illustrates what Gamow's cyclist (Figure  3a, at rest) would really look like. Not length contracted (Figure  3b) as in Gamow's picture but essentially just rotated (Figure  3c). When looking sideways onto the cyclist moving at nearly the speed of light (the viewing direction is the same as in Figure  1), one sees his back side.

The issue of the visibility of length contraction was the starting point for investigations on the visual appearance of fast moving objects. Apart from a little noticed article by Anton Lampa [ 3] in 1924, the question was first examined by Roger Penrose [ 4] and James Terrell [ 5] in 1959.