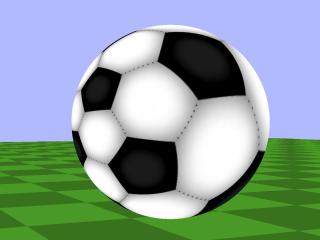 The Ball is Round

Our Contribution to the Football World Cup: In other sections of this website we show that objects moving at nearly the speed of light appear rotated, compressed, elongated or bent. A soccer ball is a remarkable exception: a freak of nature, it always appears to be round, no matter how fast it moves and in which direction: The Ball is Round.

The national soccer team of the small country X has an excellent, but somewhat philosophically minded keeper. Yesterday evening he browsed in the writings of Albert Einstein and found:

A rigid body which, measured in a state of rest, has the form of a sphere, therefore has in a state of motion - viewed from the stationary system - the form of an ellipsoid of revolution [...]. While the Y- and Z-dimensions of the sphere are not modified by its motion, the X-dimension is shortened in the ratio 1:[1-(v/V)2]1/2, i. e. the more the larger v ist. (Albert Einstein, 1095 in [1]. Here, X is the direction of motion of the sphere and v is its velocity; V is the speed of light.)

It was not difficult for him to visualize this:

(The soccer ball moves across the image along the row of squares.)

Today on the field, Einstein's length contraction comes to his mind again and he thoughtfully watches the approaching ball (movie in slow motion).

– “Gooaal!” – What if this ball did not move at a hundred kilometres per hour but at nearly the speed of light? Would he see an upstanding pancake dashing towards him?

The game is lost, but the keeper's question can be answered. This is what a soccer ball approaching at 90 percent of the speed of light would look like (movie in extremely slow motion):

A slightly distorted pattern on the ball, but the ball is round. In spite of Einstein's length contraction to less than half its diameter. So, increase the velocity - 99% percent of the speed of light (length contraction by a factor of 1/7):

We see a more strongly distorted pattern on the ball, but the ball is round.

The soccer ball in the shape of a zeppelin! This would have been the physicists' answer to the keeper's question before the work of Albert Einstein.

It is comparatively easy to understand this movie. One only has to bear in mind the fact that in order for us to see the soccer ball, light from the ball must reach our eyes. Light ist extremely fast, but not infinitely so. Hence, it needs a certain time to cover the distance between the ball and the eye. This light travel time is responsible for everything that is strange in the movies above.

A simple example demonstrates the principle: Light coming from a rod reaches a camera. The time needed to reach the camera depends on the light ray's point of origin on the rod.

The consequence: An approaching rod appears to be elongated! This is what makes the soccer ball look like a zeppelin (length contraction omitted).

Now, what happens if length contraction is not omitted? In the case of the rod, the elongation caused by the light travel times outweighs the length contraction. I. e. an approaching rod looks longer when in motion than when at rest. In the case of the sphere, the case is more complicated. Unlike the thin rod, the sphere has a considerable width at right angles to the direction of motion. And here, again, the light travel times come into play:

A rod standing at right angles to its direction of motion appears to be distorted! The distortion in the ball pattern is produced in this way.

Adding up everything - length contraction, elongation and distortion by light travel times - a fast object can look distorted in many different ways, depending on its velocity and on our line of sight.

A soccer ball is a very special object, though: The ball is round. A sphere is always seen with an exactly circular outline, at any velocity, in any distance and for any line of sight. This has been proved in a rigorous way (Boas 1961 [2]).

Finally, we will take another look at the ball and observe it yet more closely.

Every image is a projection. In order to better see what a fast soccer ball really looks like, one would need a better perception in depth. This is provided in the next movie by cutting up the ball. The upper half of the ball slides over a plane. In addition, some strips have been cut out of the bisected ball, so that one can look inside and see its "footprint" on the plane.

The ball appears to be compressed and sheared into a long narrow shape! But when we look at its outline, the above still applies: the ball is round.

More: For other examples of the appearance of objects that are moving at nearly the speed of light, including realistic astronomic ones that have actually been observed in space, see Motion near the cosmic speed limit.