An observer (small black circular disk on the right) receives photons from all directions.

When she is sitting close to a black hole (solid circle: the event horizon, dashed circle: the circular photon orbit), she sees multiple images of the whole sky. In this diagram, the observer sits at 5 Schwarzschild radii. 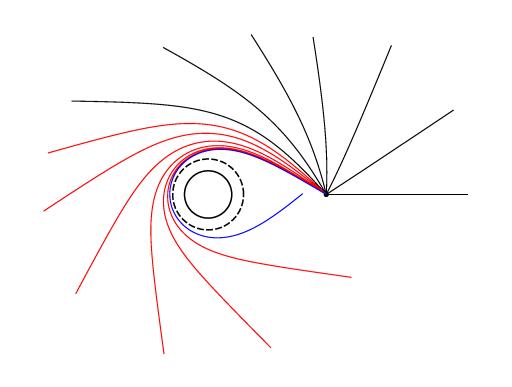 When looking all around herself, the observer receives light from one half of the horizon along the photon paths marked in black. Along the red paths, photons arrive from the other half of the horizon. The blue path belongs to the next bundle of photons which come from the first half, then comes another bundle from the second half again and so on and so on. Since photons can circle the black hole arbitrarily many times, the observer sees an infinite number of images of the whole horizon within an angle of view that is smaller than 180 degrees.

The diagram applies to every plane which contains the axis throught the observer and the black hole. To get the complete picture one must imagine the diagram rotated around this axis. It is then clear that the second, third etc. images of the sky are nested rings. In the simulation, one can clearly see the whole sky with the Milky Way inside a ring around the black hole. This ring corresponds to the red photon paths. Inside of this ring, a second ring (blue photon paths) is just barely visible very close to the event horizon. The rings farther in are even narrower and cannot be seen in these pictures. 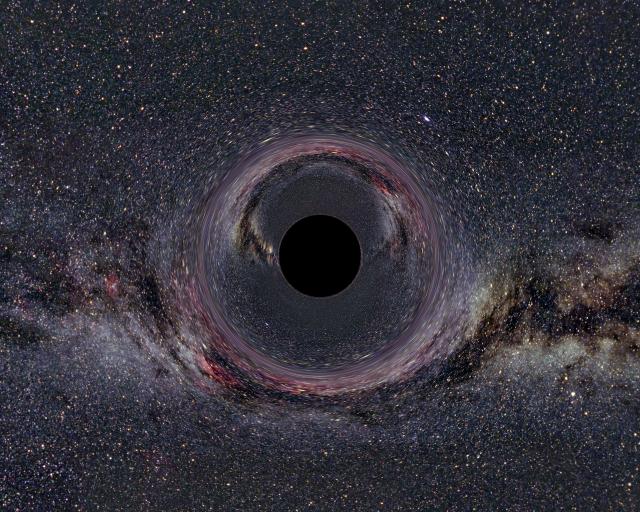