The near side: facing us yet invisible 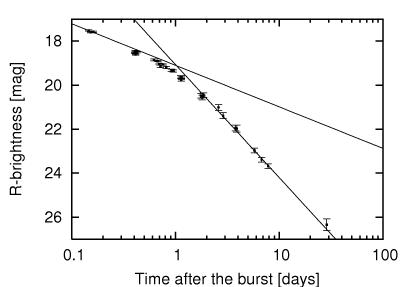 Fig. 8: The light curve of the optical afterglow of gamma burst GRB 990510 displays a decrease in brightness that suddenly steepens after about 1.3 days. This break in the light curve is called the "jet break" and supposedly shows that the observed radiation comes from a jet rather than from a spherical outflow. (Data from [ 4])

In everyday life, experience tells us that the side of an object facing us is visible to us if no other object blocks the view. This is no more true if we watch objects in extremely fast motion. Then, the side of an object may be invisible although it is in fact facing us with no obstacle in between. This is illustrated by the cubes in Fig.  5 and the following computer simulation shows another dramatic example.

When looking at a sphere we normally see one half of its surface (Fig. 7a). But if the sphere expands rapidly, then only a part of its near side is visible. The faster the sphere expands, the smaller the visible part (Fig. 7b to f). Photons reach us from the inner part of the sphere only. This is a section of the surface onto which we look nearly in the radial direction. The reason is that photons escape from the relativistically expanding sphere only if their direction is nearly radial.

This phenomenon plays an important role for our understanding of the light curves of gamma-ray bursts. It is currently assumed that gamma bursts, observed at a rate of about one a day, usually or maybe always signal the formation of a black hole. After the burst in gamma rays which lasts for seconds to hours, an afterglow in the X-ray to radio regime persists for several days. In a gamma burst an enormous amount of energy is liberated. According to current models, a so called fireball of relativistically moving particles is created. The fireball expands at nearly the speed of light, sweeps up the surrounding medium and is gradually decelerated in the process. The afterglow is produced at the border between the fireball and the surrounding gas. It is assumed that in many cases the fireball is not spherical but rather a collimated flow in the shape of two narrow jets directed away from each other. A sign for the existence of jets is present in the light curves of the afterglows in the form of a break, the so called "jet break" (Fig. 8).

The jet break is caused by the phenomenon of the partially invisible near side mentioned above. When a luminous ball of gas expands with a high velocity, then only a small part of its surface is visible, the central part around the line of sight. When the expansion slows down, more and more of the surface is seen. This affects the light curve: On the one hand, the brightness of the gas decreases with time, on the other hand, the visible part of the surface becomes larger. The net effect is that the observed flux goes down, but not as fast as one would expect from the decrease in brightness alone.

Now, imagine that we see not the surface of a sphere, but just the front of a jet (marked in the lighter shade of yellow in Fig.  7). At first, the jet front, too, is only partially visible and the decrease in observed flux is delayed. After a certain deceleration, however, the entire jet front is visible. Then, the observed flux decays faster than before. The transition between the two regimes shows up as a break in the light curve, the "jet break".