An unexpected view of the back side 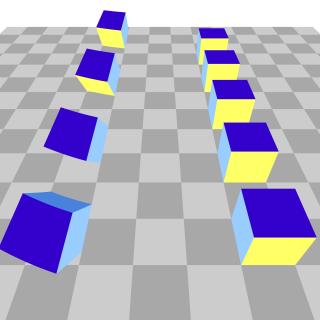 Fig. 5: A row of cubes approaching at 70% of the speed of light (left) alongside a row of cubes at rest (right). All cubes have the same size (when measured at rest), the same colors and the same orientation on the checkered platform.

Thinking of the rods in Figs.  1 and  2, one might be tempted to guess that any object moving at nearly the speed of light looks either elongated or shortened in the direction of motion. In fact, more surprising things happen, if the object is not, like the rods, completely flat. Fig. 5 gives an example: Cubes on a checkered platform approach us at 70% of the speed of light (left). They have the exact same orientation as the cubes at rest on the right hand side - but they appear to be tilted over to the front!

Shouldn't they appear to elongated in the same way as the moving rulers? In fact, there is no contradiction between this image and the elongated rulers. The side of the moving cube does look elongated (compare the length of the lower horizontal edge of each of the four cubes to the width of the background squares). All the same, the overall impression is that of tilted cubes, not elongated ones. This is especially true in the foreground, where the back side of the moving cube is visible, but the yellow front side is not.

The question now is: How does light from the back side of the cube reach the camera? The cube should block the way! The answer is illustrated in Fig. 6: The cube gets out of the way fast enough. The velocity vector of a photon directed towards the camera can be split up into a horizontal component (towards the cube) and a vertical component. Each component by itself is smaller then the speed of light. The horizontal component can therefore be surpassed by the cube velocity. In this case, the cube outruns the photon, the distance between photon and cube increases while the cube moves to the right and the photon towards the camera - the photon escapes.

The reverse is true for the front side: In order for a photon to escape, its horizontal velocity component (away from the cube) must be larger than the cube's velocity. This is true only for photons which are directed not too far to the side. The directions of the escaping photons are all within a circular cone and the faster the cube, the narrower the cone. If the photons within this cone miss the camera, then the front side is not visible.

Fig. 6: Why we may see the back side of a cube if the cube is moving fast enough. The photon velocity (blue arrow) has two components (grey), a horizontal one (towards the cube) and a vertical one. If the horizontal component is smaller than the velocity v of the cube (black), the photon escapes because the cube outruns the photon and so moves out of the way fast enough. In this figure the cube moves at 95% of the speed of light and, correspondingly, is contracted in the direction of motion to 31% of its rest length. Thin solid lines mark the distance already covered by the light ray, dotted lines indicate the remainder of the light path.
continue...