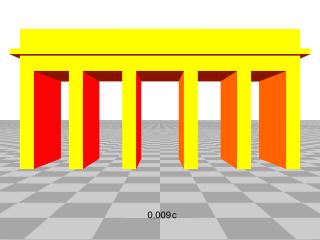 On this relativistic trip we start from rest, accelerate to 90% of the speed of light, slow down again and then stop. While moving we look ahead and there see the Brandenburg Gate that we approach with this short sprint.

The gate seems to recede into the distance! In spite of the fact that we are approaching it and even approaching at an accelerated rate.

For comparision we follow the same route with a much smaller acceleration leading to a maximum velocity of "only" 0.9% of the speed of light (a mere 2700 kilometres per second) – at this velocity, no relativistic effects are visible.

So what is the reason for the surprising impression of the receding gate during the first, fast trip?

From this, then, it becomes clear why the gate seems to recede during the accelerated fast trip: When the velocity of the camera comes close to the speed of light, then the effect illustrated above becomes apparent: The gate seems to be farther away than on the picture taken by a camera at rest (or moving slowly) at the same position. Further acceleration increases the camera speed so that this effect becomes even stronger - the gate seems to move into the distance.

More: Another example: Through the city at nearly the speed of light also features a trip with acceleration. Also, this section explains in detail why the picture taken by a moving camera is different from the picture taken by a camera at rest at the same position. Trips all the way through the Brandenburg Gate can be found in Visual observations in high speed flight.