The argument so far describes the formation of the image in the rest frame of the gate. Let us now switch to the frame that moves with the camera. In this frame the camera is not contracted in length. From the position and the size of the image one can deduce the directions in which light rays must have entered the camera. These directions do not agree with the directions assigned in the rest frame of the gate (Figure 7). The fact that it depends on the observer's state of motion which direction is assigned to a light ray (or another motion), is a phenomenon called aberration. 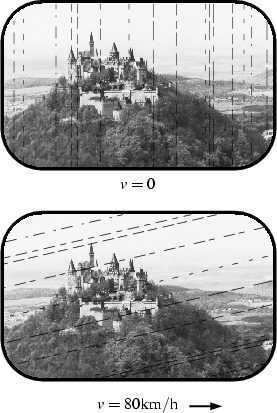 Figure 8: Aberration in everyday life. On a windless and rainy day, the rain falls vertically, as judged by an observer at rest (in a train that is not moving, top). When the train moves, however, the rain approaches obliquely from the front (bottom).

In everyday life, aberration can be observed for example during train ride on a rainy but windless day. When looking out of the window, the rain is seen to fall vertically, as long as the train is not moving (Figure 8 top). However, when the train does move, the rain comes obliquely from the front (Figure 8 bottom).

The relation between the different directions in the different frames of reference can be derived in an elementary way by considering how an image is created in a pinhole camera (Figure 9): A photon enters the moving camera propagating at an angle \(\theta\) with respect to the optical axis (top). Its velocity component perpendicular to the image plane is \(c \cos\theta \). The image plane on its part approaches the photon with the camera speed \(v\). When the distances that the image plane and the photon, respectively, have covered, \(v \Delta t\) and \(c \cos \theta \Delta t\) add up to the distance \(l\) between the pinhole and the image plane, the photon reaches the image plane (Figure 9 bottom left). Due to length contraction, \(l\) is smaller than the distance \(l'\) in the camera at rest: \( l=l' \sqrt{1-v^2/c^2}\).

After this time the photon has reached a distance of

from the optical axis. This point of impact is now considered in the rest frame of the camera. A photon reaching it must have entered the camera at an angle \(\theta\) with respect to the optical axis that is given by 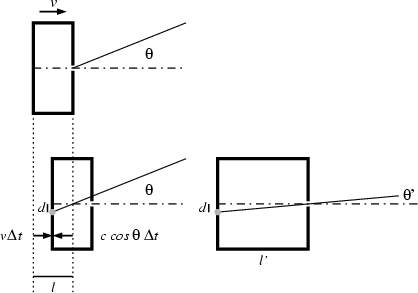 Image formation in a pinhole camera, used to derive the equation of aberration. A photon enters the moving camera at the angle \(\theta\) with respect to the optical axis (top) and is a distance d away from the optical axis when it reaches the image plane (bottom left). In the rest frame of the camera the image point with distance d is reached by photons that enter at an angle \(\theta'\) that is smaller than \(\theta\) (bottom right).

This relation between the angles θ and θ' in two different frames of reference in relative motion now permits to interpret the snapshots from the high speed flights in terms of aberration. 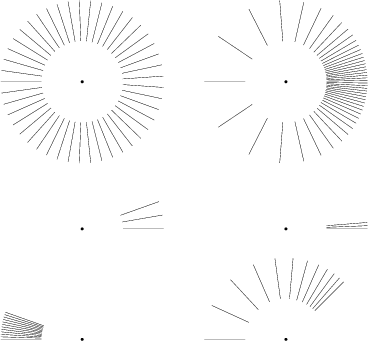 Figure 10: Aberration of light. The dashes mark the directions of light rays recorded by a camera located at the central dot. A camera at rest (left column) and a second camera in motion with respect to the first (right column, motion to the right) record the same light rays when they are momentarily at the same position. These same rays, however, are received from different directions. The relative velocity is 90% of the speed of light (top, middle) and 99% of the speed of light (bottom), respectively.

The relation between the directions of light rays as recorded in different frames of reference is given by equation 3 and illustrated in Figure 10. In the figure, a camera located in the center (black dot) receives light rays from different directions (marked by dashes). A camera at rest (left) and a second camera in motion with respect to the first (right, motion to the right), when momentarily at the same place, record the same light rays, but from different directions. The directions recorded by the moving camera are "turned to the front". In this illustration, approaching the door means that light is received from an object to the right (middle row in Figure 10). The light from this object reaches the moving camera within a smaller solid angle, the object therefore looks smaller. The view of the gate just after the camera has emerged from the archway corresponds to an object on the left hand side (bottom row in the same figure). For a camera at rest and looking to the right this object is not visible. But for the moving camera these light rays are "turned to the front" so that the outermost rays may come towards the camera and make the object visible. The distortions of the gate and the tiles when photographed by the moving camera are also consequences of aberration. They appear because aberration is stronger for some light rays than for others, depending on direction.