Simple explanation by means of a moving pinhole camera 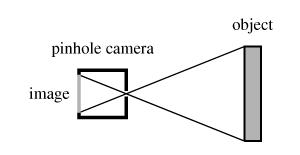 Figure 4: A pinhole camera (top). Light enters through the pinhole and creates an image on the back plane (bottom). 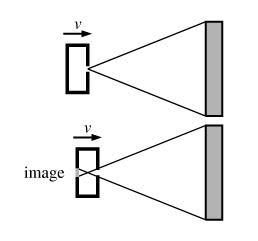 Image formation in a moving pinhole camera (90% of the speed of light). The camera is contracted in the direction of motion. Light rays enter through the pinhole (top) and some time later reach the image plane (bottom). All along the camera continues to move.

The snaphots shown above from a high speed flight through a gate raise (at least) the following two questions:

How can the moving camera "look backwards"?

Both questions can be answered in a simple and non-mathematical way by considering how the picture is generated in a pinhole camera. Figure 4 illustrates the principle: Light rays enter through a pinhole into a box and create an image on the back plane. When such a pinhole camera is in fast motion, there are two major consequences for the image formation. Firstly, there is the special relativistic effect of length contraction: the camera is shortened in the direction of motion by a factor of \(\sqrt{1-v^2/c^2}\) (\(v\) the camera velocity, \(c\) the speed of light in vacuum). Secondly, the camera continues to move while, within it, light propagates from the pinhole to the image plane. Both of these effects shorten the distance that the light has to cover between the pinhole and the image plane. Any given light ray therefore reaches the image plane closer to the center of the image than it would in the pinhole camera at rest (Figures 4,  5): the gate looks smaller.

Finally, Figure 6 illustrates how the moving camera manages to look backwards. Because of the motion of the camera, a photon that comes from above and behind it can be caught with the pinhole and then swept up by the back plane. 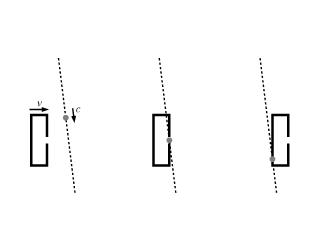